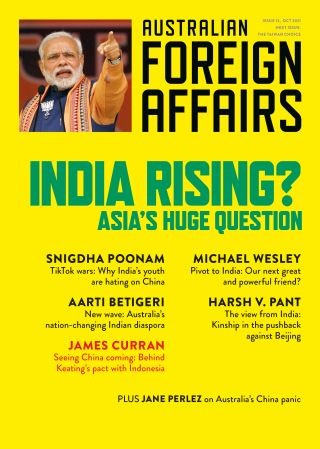 Could India, an emerging giant and growing geopolitical player, change the balance of power in the Indo-Pacific?

“As Australia’s relationship with China has soured, probably irretrievably, India has emerged as the great new hope.” MICHAEL WESLEY

The thirteenth issue of Australian Foreign Affairs examines the future of India, a rising giant whose unsteady growth and unpredictable political turns raise questions about its role and power in Asia.

India Rising? explores the challenge for Australia as it seeks to improve its faltering ties with the world’s largest democracy, a nation whose ascent – if achieved – could reshape the regional order.