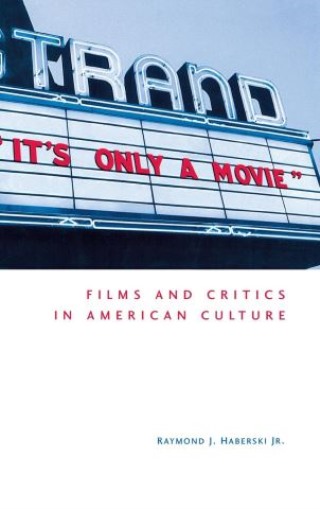 It's Only a Movie!

Films and Critics in American Culture

Once derided as senseless entertainment, movies have gradually assumed a place among the arts. Raymond Haberski's provocative and insightful book traces the trajectory of this evolution throughout the twentieth century, from nickelodeon amusements to the age of the financial blockbuster.

Haberski begins by looking at the barriers to film's acceptance as an art form, including the Chicago Motion Picture Commission hearings of 1918–1920, one of the most revealing confrontations over the use of censorship in the motion picture industry. He then examines how movies overcame the stigma attached to popular entertainment through such watershed events as the creation of the Museum of Modern Art's Film Library in the 1920s.

The arguments between Pauline Kael and Andrew Sarris's heralded a golden age of criticism, and Haberski focuses on the roles of Kael, Sarris, James Agee, Roger Ebert, and others, in the creation of "cinephilia." Described by Susan Sontag as "born of the conviction that cinema was an art unlike any other," this love of cinema centered on coffee houses, universities, art theaters, film festivals, and, of course, foreign films.

The lively debates over the place of movies in American culture began to wane in the 1970s. Haberski places the blame on the loss of cultural authority and on the increasing irrelevance of the meaning of art. He concludes with a persuasive call for the re-emergence of a middle ground between art and entertainment, "something more complex, ambiguous, and vexing—something worth thought."