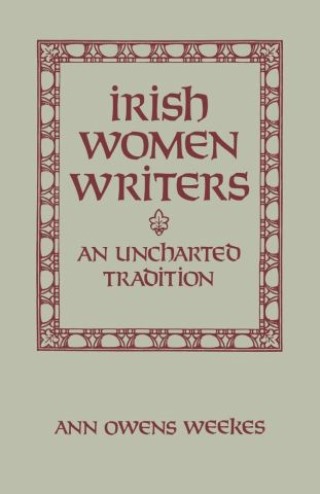 From the legendary poet Oisin to modernist masters like James Joyce, William Butler Yeats, and Samuel Beckett, Ireland's literary tradition has made its mark on the Western canon. Despite its proud tradition, the student who searches the shelves for works on Irish women's fiction is liabel to feel much as Virginia Woolf did when she searched the British Museum for work on women by women. Critic Nuala O'Faolain, when confronted with this disparity, suggested that "modern Irish literature is dominated by men so brilliant in their misanthropy... [that] the self-respect of Irish women is radically and paradoxically checkmated by respect for an Irish national achievement."

While Ann Owen Weekes does not argue with the first part of O'Faolain's assertion, she does with the second. In Irish Women Writers: An Uncharted Tradition, she suggests that it is the critics rather than the writers who have allowed themselves to be checkmated. Beginning with Maria Edgeworth's Castle Rackrent (1800) and ending with Jennifer Johnston's The Railway Station (1980), she surveys the best of the Ireland's female literature to show its artistic and historic significance and to demonstrate that it has its own themes and traditions related to, yet separate from, that of male Irish writers.

Weekes examines the work of writers like E.OE. Sumerville and Martin Ross (pen names for cousins Edith Somerville and Violet Martin), Elizabeth Bowen, Kate O'Brien, Mary Lavin, and Molly Keane, among others. She teases out the themes that recur in these writers' works, including the link between domestic and political violence and re-visioning of traditional stories, such as Julia O'Faolain's use of the Cuchulain and Diarmuid and Grainne myths to reveal the negation of women's autonomy. In doing so, she demonstrates that the literature of Anglo- and Gaelic-Irish women presents a unified tradition of subjects and techniques, a unity that might become an optimistic model not only for Irish literature but also for Irish people.

Ann Owens Weekes: Ann Owens Weekes is a retired associate professor of humanities and English at the University of Arizona and author of Unveiling Treasures: Attic Guide to Published Works of Irish Women Literary Writers.