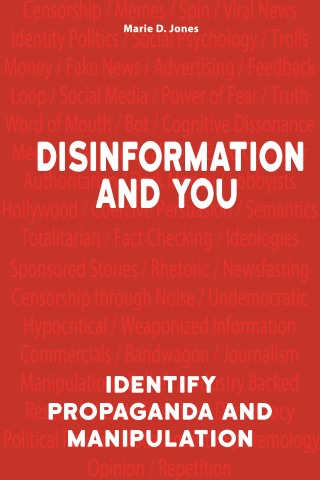 They provoke you with anger because fear-filled people are easier to manipulate. The tricks, tools and tactics used to influence you and your loved ones—along with the history of propaganda—explained and explored.

We live in an age of disinformation, misinformation, and outright lies. The modern world blasts us with information, talking points, spin, advertising, and attempts to persuade. But what are we to believe and whom should we trust?

Examining the history of propaganda and disinformation in war, politics, polling, media, entertainment, cults, advertising, science, medicine, today’s media landscape, and even in our personal interactions, Disinformation and You: Identify Propaganda and Manipulation helps you spot and counter the seductive and deceptive tactics to influence individual behavior. It provides helpful suggestions and tips for identifying disinformation and fighting back against manipulation and censorship.

Engaging and useful, this book’s helpful topics include …

Marie D. Jones: Marie D. Jones is the author of over twenty nonfiction books, including Visible Ink Press’The Disaster Survival Guide: How to Prepare For and Survive Floods, Fires, Earthquakes and More, Earth Magic: Your Complete Guide to Natural Spells, Potions, Plants, Herbs, Witchcraft, and More, and The New Witch: Your Guide to Modern Witchcraft, Wicca, Spells, Potions, Magic, and More, as well as Mind Wars: A History of Mind Control, Surveillance, and Social Engineering by the Government, Media and Secret Societies. A former radio show host herself, she has been interviewed on more than two thousand radio programs worldwide, including Coast-to-Coast AM, The Shirley MacLaine Show, and Midnight in the Desert. She has also been interviewed for and contributed to dozens of print and online publications. She makes her home in San Marcos, California, and is the mom to one very brilliant son, Max.