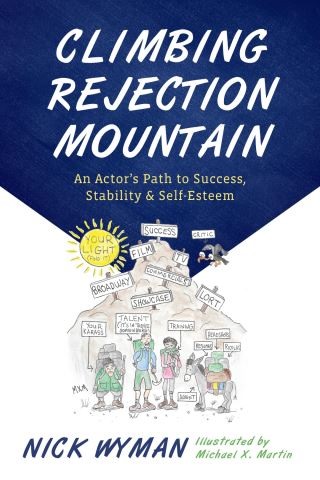 An Actor's Path to Success, Stability, and Self-Esteem

The answers to these questions, and other ideas and suggestions, are all waiting inside Climbing Rejection Mountain by Broadway veteran and former Equity President Nick Wyman. This is a book for everyone who loves theater and wonders how actors make a living, but it is most especially a book for those who are trying to make (or hoping to make) a life in theater.


Climbing Rejection Mountain is highlighted by anecdotes from Mr. Wyman’s long, illustrious career (sixteen Broadway shows) as well as dozens of clever, amusing cartoons by the noted Broadway actor (seventeen Broadway shows) Michael X. Martin. Making a life as an actor is difficult, but this book—full of practical advice and guidelines for approaching not only acting but life—will make it easier and more fun.

The former national president of Actors’ Equity Association, Nick Wyman was recently acclaimed for Network on Broadway with Bryan Cranston. His fifteen other Broadway roles include Firmin in the original cast of Phantom of the Opera, Freddy in the Rex Harrison revival of My Fair Lady, and Thenardier (for six years) in Les Misérables. In fifteen feature films, he has beaten up Bruce Willis in Die Hard with a Vengeance, sold Steve Martin a cab while John Candy stole it in Planes, Trains and Automobiles, and dug up a body for Chevy Chase in Funny Farm. He is also the proud owner of numerous television credits, including Boardwalk Empire, Veep, Elementary, and The Good Wife.

Michael X. Martin has appeared in the Broadway shows The Bridges of Madison County, The Front Page, It Shoulda Been You, Curtains, 9 to 5, Bright Star, Nice Work if You Can Get It, Catch Me if You Can, My Fair Lady, All Shook Up, 1776, Kiss Me Kate, Ragtime, Les Misérables, Man of La Mancha, Oklahoma!, and King David. He has also been in a dozen Off-Broadway shows, over one hundred regional productions, concerts at Royal Albert Hall, the Manaus Opera House, and Carnegie Hall. Recent TV credits include The Marvelous Mrs. Maisel, Madame Secretary, Boardwalk Empire, and the Law and Order hat trick. When asked nicely, he draws cartoons.