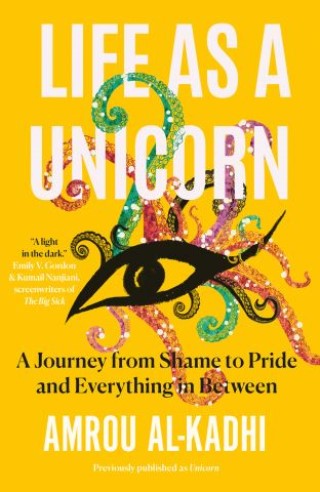 Life as a Unicorn: A Journey from Shame to Pride and Everything in Between

WINNER OF A SOMERSET MAUGHAM AWARD

Amrou knew they were gay when, aged ten, they first laid eyes on Macaulay Culkin in Home Alone. It was love at first sight.

From that moment on, Amrou began searching in all the wrong places for ways to make their divided self whole again.

Life as a Unicorn is a hilarious yet devastating story of a search for belonging, following the painful and surprising process of transforming from a god-fearing Muslim boy to a queer drag queen, strutting the stage in seven-inch heels and saying the things nobody else dares to …

Amrou Al-Kadhi is the founder of drag troupe Denim and has written an episode for Kumail Nanjiani & Emily V. Gordon’s upcoming series for Apple (US), Little America, as well as for BBC America’s hotly anticipated series, The Watch. Amrou has two original TV-series in development, one with Channel 4 Comedy and the other with BBC Drama. Amrou has written and directed four short films that focus on the intersection of queer identity and race, and has features in development with Film4, the BFI and BBC films. Their journalism has appeared in the Guardian, Independent, Gay Times, Attitude, CNN and Little White Lies, among other publications. Life as a Unicornis Amrou’s first book.